Week 5: “Poverty is an opportunity” 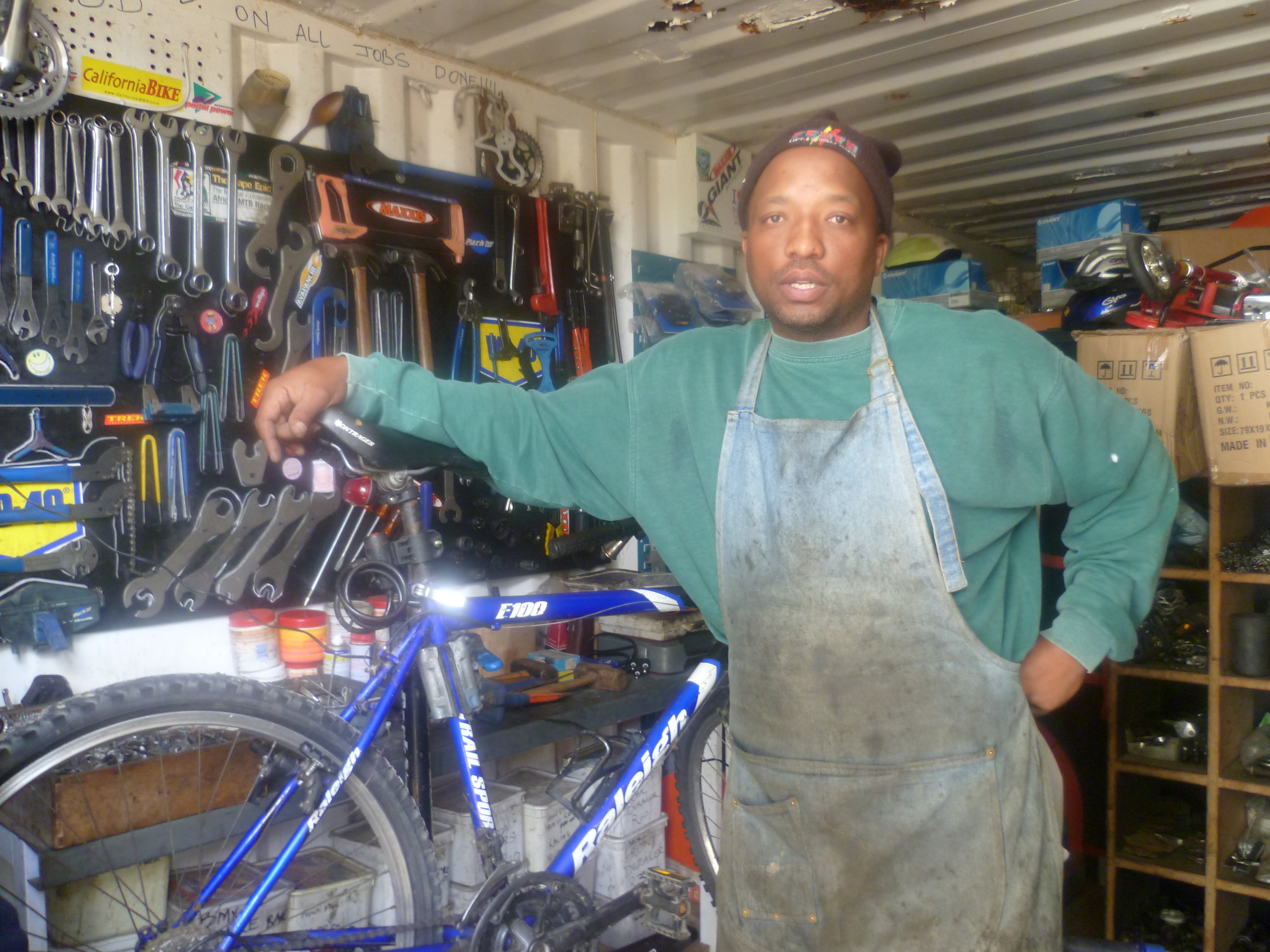 Meshack Nchupetsang, in his Westlake workshop

“I’ve always seen my problems as challenges,” explains Meshack Nchupetsang, entrepreneur and owner of Eyethu, who is holding court in his shipping container, fully kitted out as a mini bike workshop with state-of-the-art tools and parts. We’re in Westlake, a small township that sits cheek by jowl with an exclusive golf resort, one of the most upmarket high schools in the Cape, and Pollsmoor prison, where Nelson Mandela was incarcerated. When he explains that he saw his poverty as an opportunity, we’re not entirely sure how to respond, jarring as this does with so much of what we’ve heard over the last few weeks.

It’s mid-morning on June 16th: Youth Day in South Africa – in honour of young people who died during the Soweto riots of 1976 – and a public holiday. There’s a Sunday morning feel as both coloured and black inhabitants in this mixed community go about their business.

Our interview with Meshack is scintillating. He’s a born marketer and story-teller, who tells of the familiar pilgrimage from the Eastern Cape to try and find a living. Initially sleeping on the streets, he managed to find voluntary work in a hostel and gradually worked his way up to paid work, building his own shack, and then eventually landing a job with a corporate company.

Losing this job in the wake of September 11th, he decided to start his own business fixing and renting bikes, and now runs a successful workshop which he is hoping to scale up into Khayelitsha and other townships across South Africa.

This is the flipside, the lighter side of the moon. Someone, albeit older than most of the people we’ve spoken to, who talks of positivity, perseverance, initiative, ingenuity… how when he had his first proper job interview, went in convinced on taking control of the conversation, and asking questions about the company’s ethos and culture (and apparently ended up in an hour-long chat about families with his interviewer). As we talk, he manages to serve two or three customers in between sentences, hopping out to have hasty conversations in Xhosa, pumps a tire here, checks some brakes there.

Our questions today, in the context of my research, are: What makes someone like Meshack different? What forges that innate strength, conviction, inspiration to keep going, to rise up? Having a dream, self-respect and self-motivation, is what he would tell young people today to hold onto. But he admits that this motivation often only comes from family. In his case, a mother who would ask him whether he wanted to eat his friends’ shit.

“When I imagine eating my friends’ shit,” he explains with a glint in his eye, “I get so motivated.”