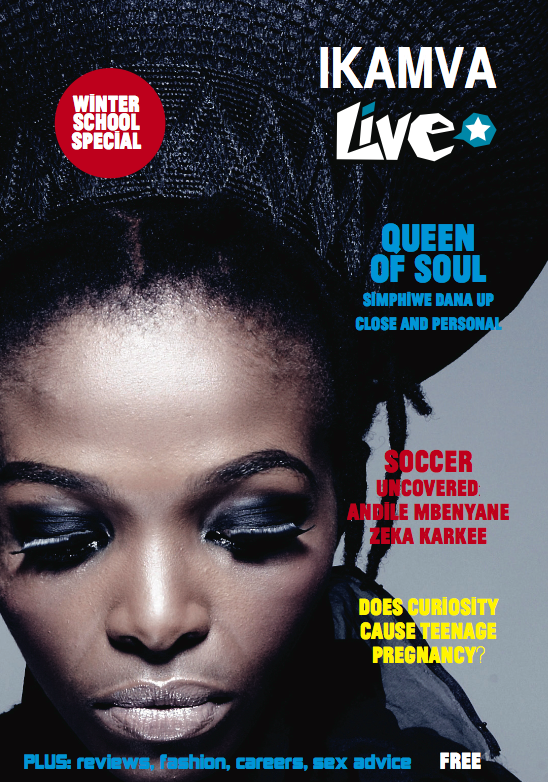 This morning I sent our one-off Ikamva Live mini-mag to the printers, less than seven days after the first word of the content was written. The magazine was all created by a team of almost exactly 20 young people, aged from 14 to 21, but mainly from the lower age groups.

The core group, who spent the first three days getting a quickfire background to making magazines, were from Makhaza in Khayelitsha. A second squadron from Masiphumelele parachuted in at the beginning of Content Blitz week and hit the ground running. We were operating out of a cluttered classroom at the Tsiba school in Pinelands, which by the end of the week was adorned with moodboards, flatplans and biscuit crumbs… with a computer room on hand for those needing to type things up or research.

It’s not over yet: we have the launch, the distribution, and our experiment with linking the content to a mobile channel via Mxit to contend with yet….

But in the meantime, here are 7 things I learned from the week:

1. You can get a lot done in one week: we did it, we made it. And it feels good. In all honesty, I was in two minds about doing this project, entirely due to the short time-scale I had to prepare for it, with a ten day trip to Geneva hoving into view (only returning the day before we started) and an already-packed meeting schedule. I had no idea how capable the learners were, how many of them we had, or whether I would be able to pull together a reliable mentoring team in time. By hook, crook, a little persuasion, a lot of goodwill, the odd sweaty moment, lots of driving around, and a flurry of phone calls, hastily-devoured sandwiches and late nights, the team managed to pull it all together.

2. Some people just GET it: Every day I rocked up to the Tsiba school with a bakkie packed with a different collection of odd-fellows as mentors. Everyone who turned up mucked in, even though they weren’t journalists (see point 3 below). Sometimes with barely a 30 second briefing from me, we had people sitting down to work on pieces with kids they’d never met, for a magazine that didn’t yet exist.

We couldn’t never have done any of this without the hard-work of Lynne Stuart, our design mentor; but particular mention must also go to volunteers Nkuli Mlangeni (stylist and photographer) and Claire Conroy (marketing and advertising), who both stayed the distance and got the very best out of the kids… with an honourable mention to Cebisa Zono, who would have been there until the end had he not, sadly, had to return to the Eastern Cape. The Big Issue team, as well, were generous with their time, advice and input, spending a whole afternoon with us at the end of the preparatory week.

3. Some folks are flakey… or maybe just afraid: I had numerous offers of help and support from Cape Town journalists. I replied to every person, followed up as much as possible, and even squeezed in meetings with one or two to try and reassure and explain what was gong to happen. Aside from the Big Issue team, who came down to be interviewed, not one of the journalists showed up. I’m left wondering why…

Maybe I wasn’t reassuring enough, maybe I didn’t explain it fully, or maybe they are all just incredibly busy. Those are some of the more generous conclusions I’ve come to. The one thing I’m convinced of is: come down once, get stuck in, and almost always you’ll want to come back and do it again. Mentoring is a two-way experience - valuable to mentor and mentee, but I realise I have an ‘education’ job to do to persuade people in this city of that. And I’m determined to succeed.

4. Stay focused: Live Magazine, when it launches here, will need to be focused on an older age group. Our Ikamva Live team got a lot out of it. And although there will be plenty of opportunities for high school age kids to get involved and interact, the real sweet spot I think is post-matric, age 18 and above. I’m more convinced than ever that Live needs to help those who have already overcome the hurdle of getting their education, but are still left lost and unemployed…

5. Be clear, and don’t break promises: one girl, who joined the team late (we never found out why), was harder to communicate with the rest, and looked tense and unhappy for most of the week - possibly due to a lack of confidence in herself and her ability to speak English. She revealed that she was interested in photography, and I suggested she take the photos for the Simphiwe Dana interview later that week. She shrugged and I decided not to push it, and then later in the week forgot to ask her again.

After the interview happened (and unaware that it had taken place) she came up to me and asked me if she would still be able to take the pictures, as I’d promised her she could. I had to apologise profusely, but she simply walked off, clearly annoyed and upset. I’m now trying to hatch a plan to make it up to her.

6. Ikamva Youth is truly changing lives: whatever they’ve created here, it’s working. With 5 branches nationally, and more on the way (including an international chapter in the works), the model clearly rocks. In our interview with her for the magazine, founder Joy Olivier revealed that their matric pass-rate has never fallen below 87%: an astonishing statistic for a demographic who regularly drop out or scrape through. I have much to learn from their disciplined approach (where attendance is key and only dedicated learners succeed), and there are brilliant synergies and ways of working with each other in future.

7. The kids are alright: more than alright, in fact. They were truly admirable. The Ikamva Youth learners who put themselves forward for this Media course qualify to become Ikamvanites by hard-work and dedication. They turn up three times a week for extra tutoring and then give up the vast majority of their school holidays for more of the same. They’re bright, determined, hard-working, fun, open-minded, enthusiastic, polite, attentive and I loved working with them, as did all the mentors.

It was easy to forget that the team all spoke Xhosa as their mother tongue. They were shy to begin with, as kids are when they have to speak and write in a second language. And it was also pointed out to me that my English accent is sometimes hard to understand (and in fact sounds weird). Aside from the language barrier (which also made feedback and instructions sometimes difficult for the ones who were less confident in their English) the days were long. I was thinking how bitterly I would have resented giving up every day of my school holiday, and how fatigued I’d be by 3pm after an 8am start to a daily dose of maths and science tutoring. Every day they powered on until 4.30.

To quote Simphiwe Dana, in our interview with her in Ikamva Live - ‘It is very difficult right now for an African child. You have to make it against all odds. If you are raised by grandparents, you’re probably raising your siblings yourself. If your father’s there, he’s an alcoholic, your mother the same thing. Some days you go without eating. You don’t have textbooks. Your neighbourhood is not safe. Everything is stacked against you. And that is the reason why you must succeed. So you can say one day, despite the odds, “I made it”.’

Towards the end of the week, I was packing up and trudging out of the building with the other mentors, taking one of those long exhales that teachers or child-minders must enjoy when the whirlwind of youth exits the building at the end of the day. The kids were all packed onto the slightly ancient bus in the parking lot, but I saw one figure running towards me. It was Anathi, who’d been quiet for most of the first few days, but had revealed himself as a more than competent, in fact rather eloquent, writer.

‘Gavin’, he said quietly. ‘Are we going to do this magazine again? I love being a journalist…’

Award-winning South African sci-fi novelist Lauren Beukes came to the Ikamva Live temporary editorial hub today for a quickfire interview with the Ikamva Live team from Masipumelele. With only one day to prepare, our 7 aspiring journalists asked some searching questions about her career challenges, the secrets to literary success, and what was in her handbag.

The week is hotting up: tomorrow will reach a fever pitch of excitement with the fashion shoot, an interview with two professional footballers, and all other kinds of madness. Only three days to go…

The Masi interview squad get cosy with their subject

Getting the right shot...